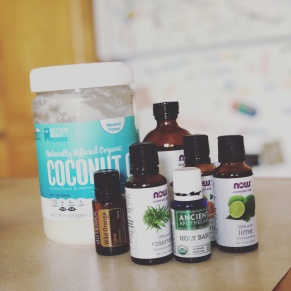 I love to make my own homemade soaps and scrubs… but sometimes?

Sometimes the writer in me comes out.. and my imagination gets the best of me..

If Earth is invaded by predators or aliens? Would they think that I’ve already been marinaded in advance?

Will their mouths water at the smell of the Rosemary and thyme?

…will the Holy Basil be enough to keep me safe if they are demonic invaders?

Ha… as I stir the sugar scrub I’m sending to my daughter? I could write a whole book on whether I’m saving her .. or preparing her marinade!!

But really this isn’t unlike any other parenting question…

I often wonder if I’ve given my daughter the tools to be confident and stand out..

.. does she have the confidence and understanding to avoid predators in her life?

… does my son have the discipline and coping mechanisms to succeed in a workplace?

… Did we teach enough skills to let his light shine brighter than the Autism?

… did I fill my daughter full of enough empowerment.. that she knows she is more than her pretty face and her waistline? 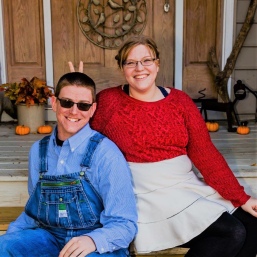 Then I see their smile.. I see them laugh..

No one ever tells you how dangerous parenting can be… 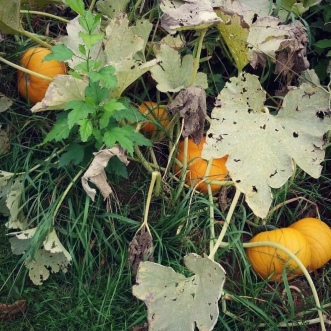 Last fall, he was too busy to throw away the jack o lanterns.

Ok.. ok.. his actual words were that he was “too lazy”… but how many of us don’t get too busy and feel too tired to do the small things..

We all get lazy..

Looking at his pumpkins, made me remember that we had planted some in our garden. 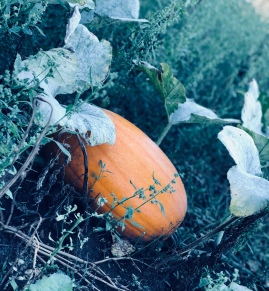 ..but then left to defend themselves.

As I walked through the garden… I was surprised by how well the plants had blossomed. How big our harvest was going to be.. with no actual work on our part beyond the sowing of the seeds. 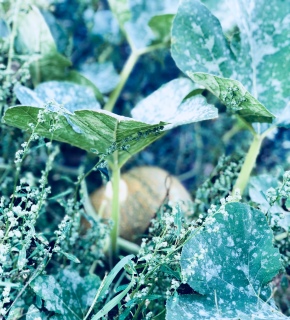 Those pumpkins took the seeds we gave them.. and didn’t just sprout.. and blossom.. they grew into beautiful fruit..

They took the space we gave them and spread their leaves … made a place in this world.. some even grew despite sickly plants and bad soil..

We all sow seeds in our lives..

Some we spread on purpose… our help.. our time.. our smiles.. a listening ear..

.. but we also spread seeds on accident..

Yesterday.. I was researching a concern I have about my son…. when I felt a soft object hit my face. A balled up napkin. Looking up, my son smiled at me and said, “There you are.. you’re being too busy.”

I laughed.. and put my phone down. My son may have a disability (in the eyes of the world) .. but he is pretty smart.

We are all so busy with worries, and tasks… working … and taking care of our responsibilities…

..but the seed I was sowing in that moment was.. I’m too busy.. you aren’t as important as my phone…

Those are not the seeds I want to sow.. and most of the time they aren’t.. but accidentally?

The question is what kind of seeds.

This keeps me up at night…

I want to change the world.. I want to make it a beautiful place for kids.. a better place..

I listen to kids.. correct them when they are wrong… justify their emotions.. empower them to change their own world..

…but what about the kids I can’t reach.

What about when I am too busy to slow down and listen?

And it was about my son.

So many people stopped to shake his hand. So many people greeted him. Asked him how he was doing. This boy with a disability… showing the ability to touch so many lives. It is such a beautiful thing.

But what surprised me?

What surprised me were the kids that were excited to see ME. Many of the students from the school I worked at last year.. shouted across a crowd to get my attention. Some rushed to hug me, before rushing off with their friends.. A few gave timid waves before moving on.

Those students are just like the pumpkin blossoms that I find in my garden. So beautiful.. so open to the world.. so ready to grow into their full potential..

What we give them … as parents.. as family.. as a community?

What we give them makes a difference in how well they grow.. what they grow into…

Will they be small but mighty… will they hide behind bigger plants… shy but powerful in smaller groups.. Will they be big? Will they search for a bigger world? Will they grow despite bad soil and sickly plants?

Or will they stay small and sickly on a vine.. forgotten..

After so many hugs, from so many students last night? I realized I had sowed some good seeds. Even some on accident … to kids I hadn’t realized I had affected.

Did I sow bad seeds on accident …?

…did I not sow enough seeds on purpose?

This morning I looked down at that pumpkin blossom … worrying about those other students..

The story of how one rescuer smiles as they toss a starfish safely back into the waters.. “I made a difference to that one.”

Standing up out of that dirt.. I smiled.

As I looked around, I could see the good I have done… and realized I can’t let myself get distracted by worries.. I need to put those worries away.. and keep sowing good seeds…

…because those pumpkins.. those starfish.. are very important to me …

Everything sounds better with the echo of a still small voice.